How to be a good friend to a working mom 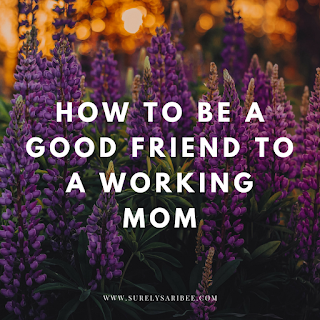 A while back, I wrote a post on the number one thing not to say to a working mom, "I could never have someone else raise my kid."

But that's only part of the things I've seen and heard. Because working moms are so busy and stretched thin, their voices aren't the predominant ones out there despite 64 percent of mothers with children under the age of 6 working outside the home. The reality of it is that a majority of mothers work.

It means choosing your battles. You only have so much time in your day and you want to maximize the time you have with your family. It means things like cleaning, exercising, cooking, self-care, doing your hair and makeup religiously can and will fall by the wayside. It means coming to terms with picking what is more important each day: the attention-starved dog, the pile of laundry, the sink full of dishes or your unshaven legs.

It means being forgotten. After so many times of declining plans with people for the aforementioned reasons, they just stop inviting you. For those of you who are not a part of a dual-parent working household, don't stop inviting the people in your life who are part of such a household to events and gatherings! It means so much that people still think of us and want to spend time with us. Certain seasons are busier than others. Now that our son is a year old and sleeping through the night, I feel like I can breathe again and have more freedom to go places with and without him. It just wasn't feasible when he was younger and needed more naps and needed help from me to fall asleep at night.

Being forgotten means when you do finally show up to a social event with a baby in tow, it's almost like you're invisible because you've been absent for so long. Being forgotten means being part of moms groups who will only plan things during workdays, or seeing the women's Bible study options that are feasible only if you don't work. For most of my son's first year, I admit I played the victim and didn't speak up about the Bible study issue in particular. That was until someone in a Facebook group for working moms encouraged me to speak up and offer to facilitate a Bible study that worked for working women. So I did, and so many women told me how glad they were that I spoke up.

It means people assume I don't want to be a working mom, or vice versa. Don't assume. Each family has different, complex reasons why they have both parents working. It may start out that the mom only works because it's a financial necessity but then she grows and changes and decides she loves being a working mom! You don't have to feel sorry for us! A new mom sees working motherhood differently than a more experienced mother does, so it really depends on the woman, her situation and where she is in her parenting journey. Don't assume she feels guilty for working, either.

It means we have to/get to rely on a village. I've mentioned this before, but I love how my son throws himself out of my arms when we get to daycare. She is able to offer him things that I can't. My son is lucky to have a biological family who loves him and this fabulous woman in his life. He wouldn't have her if I didn't work. He is better off because he has her.

But, if my daycare provider has a family emergency, it's full-on panic mode of calling everyone we can to see who can watch our child or else we need to take vacation time or work extra throughout the rest of the pay period to compensate for a day off of taking care of him. It's the same case for when he needs to get a checkup or if he's sick. It's a hectic flurry of figuring out how to live our life with the least amount of disruption.


Some ways you can be a light in the life of a working mom:

Ask her when her kid(s) go to bed, then offer to come by her house an hour after that time with her favorite snack and drink to have some old-fashioned friend time. And tell her not to clean before you get there. For me, social stuff is best done after bedtime, but after bedtime I'm too tired to go out or do anything. If the working mom in your life will allow you to meet her where she is, an hour of talking over a Little Caesar's pizza can light up her week.

Ask her how you can brighten her day. If you ask someone how they're doing, the acceptable responses are "I'm good" or "I'm tired" It doesn't actually give a window into anything of substance.

May 14, 2018
Babies are just lumps of cuteness that sleep, eat, cry and poop for months. They don't understand your words, but you still talk to them, right? While they don't understand the stories in books, it's still important to read to babies. Research finds that early exposure to language has a “profound influence on children's learning through life,” according to this NPR story from 2014 . There's nothing to lose by reading to a young baby, only something to gain. To read to a baby or child, you are close to them, which is a bonding experience too! The article states: "Just one-third of children in families below the poverty threshold are read to daily. That statistic improves as family income rises. But less than two-thirds of children in families making $95,400 for a family of four are read to daily, according to the 2011-2012 National Survey of Children's Health. As a result, children in poorer families lag behind in language processing as earl
20 comments
Read more

September 09, 2018
This is the chili that snagged me a man. Kind of. When I started dating my husband, I was so excited to have someone to cook for. Once, I told him I was making chili. He sounded disappointed. He said he didn't like chili. He loves this chili and it's not even a pity, "Dinner was good" sort of thing. He says we could have it every week and he'd be fine with it. We joke it's the chili that made him know I was the one. I started perfecting this recipe shortly after I graduated from college. I don't like chunks of onion or peppers so this recipe doesn't have any of that. You certainly can add that in if you're into that kind of thing. This is a great basic chili recipe that isn't too spicy. My husband likes it best served over pasta with cheese but we've also had it over rice, tater tots, hot dogs, French fries...the possibilities are endless. One note: I am a recipe skimper. When I see a recipe online and I see an ingredient I don&
Post a Comment
Read more

May 18, 2018
So remember earlier in the week when I wrote about having grace with yourself in whatever season you're in when it comes to spending time with God? I promised you a post with some practical ways to apply that; ways to squeeze in that time during your days. No matter how busy you are, there's got to be some sort of time you can repurpose to get in some prayer or Bible time.  You're in the season you are in for a reason. If you find yourself thinking "well, that's now how time with God is supposed to look like," I encourage you to reframe your thinking. It's supposed to look like how it is right now in the God-given season you're in! In the car: 1. Listen to the YouVersion Bible app. The Bible audio is a bit more than 70 hours long. If you have a half hour commute every day, you could listen to the Bible three times each year just in your daily commute. 2. Listen to sermon podcasts. I like The Village Church's podcast . 3. Liste
1 comment
Read more