Time with God for new moms 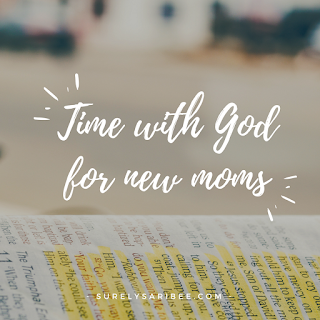 Everyone I know has at some point or another said they have difficulties making time to spend with the Lord.

I thought I had issues...until I had a baby. I could hardly take a shower or eat more than a granola bar. How was I supposed to sit down for a half hour to study scripture? I beat myself up over it for a while, until I had been back at work for months and I listened to an episode of the Journeywomen Podcast. It’s about spiritual disciplines and a man is the guest, but he gets it.

“Remember to give yourself some grace in this season. God has put you in the season you’re in. He isn’t caught off guard if you are exhausted from being up five times at night with a baby. Just do what you can. This may mean that you’re just reading Scripture and then maybe coming back at another time to dig a little deeper. Or maybe this is just the time for you to read through the entire Bible and then jump back into a more in-depth study when you’re able to. Utilize nap times. Don’t think that your quiet time has to be quiet! A lot of times, it’s just not. On the flip side, we also have to be willing to take a long, hard look at ourselves and give grace when we’re in those difficult seasons where it’s just a really trying season, and also be able to recognize when we really need to shift our priorities and prioritize God’s Word.”

How freeing is that? Time with the Lord doesn’t have to mean an Instagram-worthy moment with coffee and perfect calligraphy in your journaling Bible.

This doesn’t mean you’re giving God your leftovers. It’s letting him meet you where you’re at. It, of course, doesn’t mean making excuses to get out of spending time with him. But, it does mean that he gives you grace because of the season you’re in. So you should give yourself some grace too.

The Well-Watered Women blog hits the nail right on the head by addressing lies we believe about quiet time.

Don't put the pressure on yourself to make it perfect. Give yourself grace here. After all, it's a perfect God meeting with an imperfect human. He knows you're imperfect. Give him the best you can each day. If that best is two verses of a Psalm while you're finally using the bathroom in peace, then that's great! That is your best for that day.

(Stay tuned for Part 2 of this post, I’ll share some ways I’m able to fit in my own imperfect resemblance of a quiet time in the midst of having a young child and working a full-time job.)

May 14, 2018
Babies are just lumps of cuteness that sleep, eat, cry and poop for months. They don't understand your words, but you still talk to them, right? While they don't understand the stories in books, it's still important to read to babies. Research finds that early exposure to language has a “profound influence on children's learning through life,” according to this NPR story from 2014 . There's nothing to lose by reading to a young baby, only something to gain. To read to a baby or child, you are close to them, which is a bonding experience too! The article states: "Just one-third of children in families below the poverty threshold are read to daily. That statistic improves as family income rises. But less than two-thirds of children in families making $95,400 for a family of four are read to daily, according to the 2011-2012 National Survey of Children's Health. As a result, children in poorer families lag behind in language processing as earl
20 comments
Read more

Welcome! There's a place for you here - LAUNCHING MAY 14

May 03, 2018
"Where are all the mommy blogs?" Said no one, ever. But here I am, starting a "mommy blog." I've wanted to launch this blog for over a year now because I see a void in the online community of moms. There's not much out there for working moms. Whether you're a stay-at-home mom, homeschooling mom, working mom or whatever kind of mom you are, being a mother always has its challenges. As a working mother, I found myself needing different content than what's already out there. I searched high and low for it. I needed more hardcore meal planning on a budget with no time. I needed advice on how to manage my evenings, how to deal with the transition back to work, and if "me time" would ever exist again. When I launch May 14, the site will be ready for you with my unique take on meal planning, tips on returning to work after maternity leave and products that help me save what little precious time I have. On May 14, the blog will be live w
Post a Comment
Read more

How to be a good friend to a working mom

July 21, 2018
A while back, I wrote a post on the number one thing not to say to a working mom, "I could never have someone else raise my kid." But that's only part of the things I've seen and heard. Because working moms are so busy and stretched thin, their voices aren't the predominant ones out there despite 64 percent of mothers with children under the age of 6 working outside the home. The reality of it is that a majority of mothers work. Here's some of what it's like: It means choosing your battles . You only have so much time in your day and you want to maximize the time you have with your family. It means things like cleaning, exercising, cooking, self-care, doing your hair and makeup religiously can and will fall by the wayside. It means coming to terms with picking what is more important each day: the attention-starved dog, the pile of laundry, the sink full of dishes or your unshaven legs. It means being forgotten. After so many times of declinin
Post a Comment
Read more